What is paleoclimate? Why is it important?

Paleoclimate is the study of changes in climate through time, ranging from studies of the last century to millions of years. There are many reasons why the climate changes through time, including changes in greenhouse gases (like carbon dioxide and methane) or dust/soot in the atmosphere, changes in the amount of sunlight we receive, and even the slow movement of the continents.

The reason we are interested in Earth's climate in the past is that it helps us understand how different parts of the climate (ocean, atmosphere, clouds, vegetation, glaciers, etc.) interact with one another and how our climate might change in the future in response to man-made changes. There are two main ways people study paleoclimate: by running computer models and by measuring changes in climate through time. Climate changes can be measured by looking at the chemical or physical properties of materials formed at different times, such as old trees, fossils, ice and air bubbles in glaciers, and sediments at the bottom of lakes and oceans.

What are glacial cycles?

20,000 years ago most of Canada and the northern United States were covered by ice a mile thick. The climate has cycled between that "glacial" condition and current conditions, known as interglacial, approximately every 100,000 years over the last one million years. These huge, repeated changes in climate, called glacial cycles, are caused by relatively small changes in the amount of summertime sunlight over Canada and other areas near the North pole. Glacial cycles offer a unique opportunity to understand how the climate responds to changes in sunlight and how the different parts of the climate system interact with one another. For example, the amount of carbon dioxide increased by more than half from 20,000 years ago to 10,000 years ago. In the last century, carbon dioxide in the atmosphere has increased by almost the same amount again. 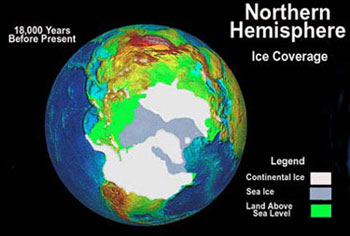 How are glacial cycles measured?

Landscape features like Cape Cod and Half Dome in Yosemite are evidence of the large ice "sheets" over Canada and the northern U.S. The size of these ice sheets at any given time affects a certain property of the shells of tiny animals (called foraminifera) that live in the ocean. These shells get buried in the ocean, and we can find shells that grew at almost any time over the last 70 million years. The property we measure is d18O, which describes the ratio of two different types of oxygen in the shell. The lighter type of oxygen, O16, is more concentrated in the snow that gets trapped on the continents to form ice sheets. This leaves more of the heavier O18 in the ocean. The ratio of the two types of oxygen in the shells is affected by the ratio in the ocean but is also affected by the temperature of the water. This makes it very difficult to know exactly how much ice was on the continents at any one time. However, separate measurements of ocean temperature in the past can be used to improve our estimates of ice sheets size. Read more about d18O here.

As part of my research, I averaged together 57 different records of change in d18O over the last 5.3 million years. This average, known as the LR04 stack, gives us a better record of change in ice volume (and temperature) than we have ever had before because averaging together many records improves the quality of the data (reduces noise and localized changes) and because it allowed me to better constrain the time at which each glacial cycle occurred.

Glaciers and ice sheets form when winter snow does not completely melt away each summer. Then the next winter's snow falls on top of this old snow, and even more snow is left behind after the next summer. After many years, this small imbalance in snowfall versus melting can create huge ice sheets. Whether or not snow melts completely away each year is primarily controlled by the amount of summer sunlight. This is known as Milankovitch theory.

The amount of sunlight received at a certain location varies with time due to cyclic changes in the Earth's orbit and tilt. These change with time due to the gravitational forces of the moon and the other planets. The three three types of change are tilt (obliquity), precession, and eccentricity. They vary in cycles of 19,000 to 400,000 years. The strongest cycle in summer sunlight in ice-sheet forming regions is 23,000 years caused by precession, but glacial cycles over the last million years are all about 100,000 years long, which is the length of one eccentricity cycle. Before that time, glacial cycles were 41,000 years long, corresponding to the length of the cycle in Earth's tilt. Why the ice sheets respond most strongly to the 41,000 and 100,000 year cycles is one of the biggest mysteries in our field. Read more about Milankovitch theory and orbital cycles.